The Importance of Aspect Ratio in Filmmaking

How the proportions of the image affect your film

The aspect ratio of your film can have a much bigger influence on your visual storytelling than you think, mostly in a subtle but significant way. While you might not always be free to choose the aspect ratio of your project (e.g., due to distribution requirements), having and making this choice can be a daunting creative task. Because selecting an aspect ratio is rarely straightforward, this article aims to provide guidance for your future projects.

1. What is the aspect ratio in film?
2. The most common aspect ratios in movies and TV series
3. How to find the right aspect ratio for a project
3.1. Story and Genre
3.2. Distribution medium
3.3. Locations and settings
3.4. Size of actors and objects in the film
3.5. Using aspect ratio as a creative tool
4. FAQ

What is the aspect ratio in film? 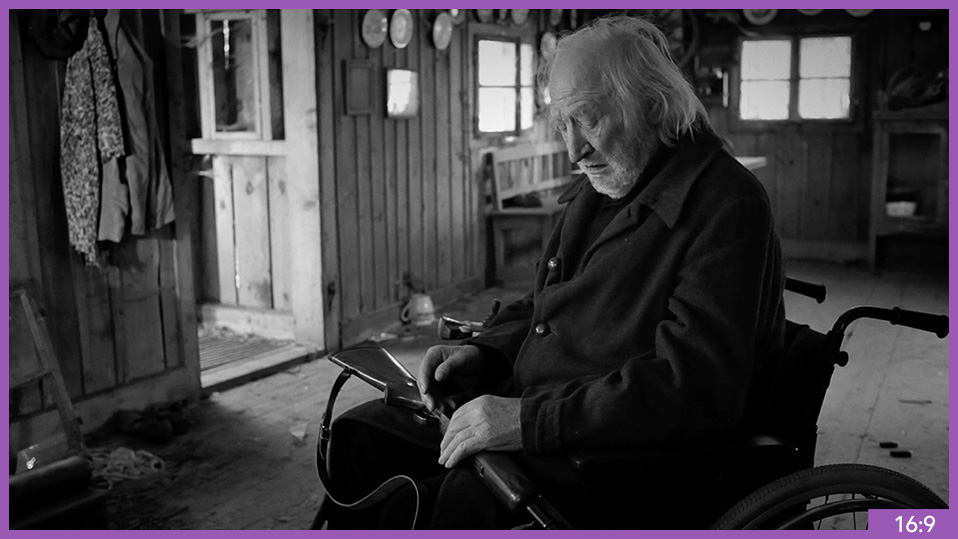 In the digital editing and post-production process, the aspect ratio can be changed until the last moment before the final export of the finished film. However, it is advisable to decide which aspect ratio to use before your first day of shooting.
That decision will affect the staging and framing of every shot you make and is a crucial basis for how you compose your shots. You could compare it to a painter deciding on the shape of the canvas for a new painting – a choice that also must be made before the first brushstroke. 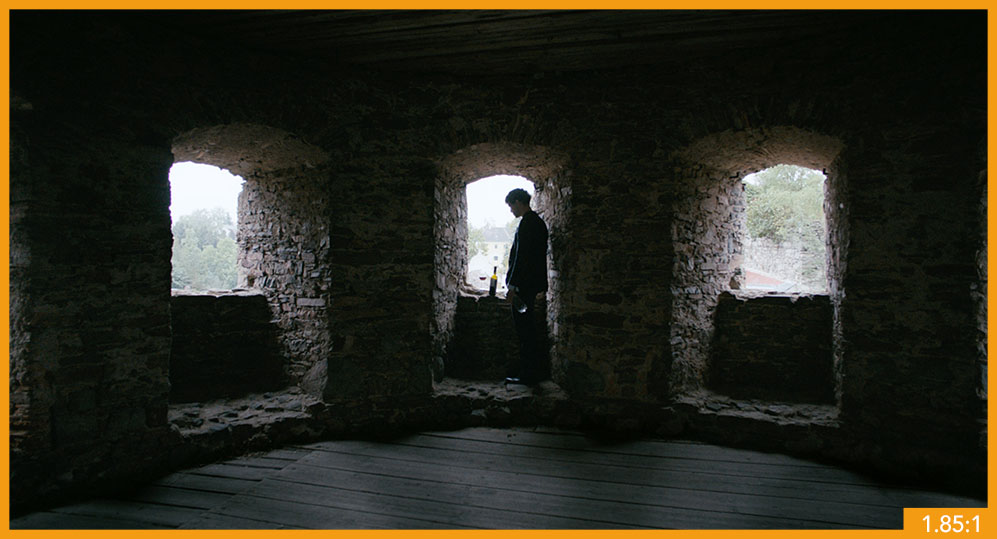 Before we examine various factors that can influence this decision, let’s take a quick look at the most common aspect ratios in professional filmmaking.

The most common aspect ratios in movies and TV series

Nowadays, in our digital age, given the increased use of smartphones and social media for the consumption of visual content, nearly every imaginable aspect ratio can be used for films and videos.
Throughout film history, several aspect ratios have been established. They are still most commonly used for the “classic“ distribution via cinema, television, and online streaming platforms. We will focus on these aspect ratios. 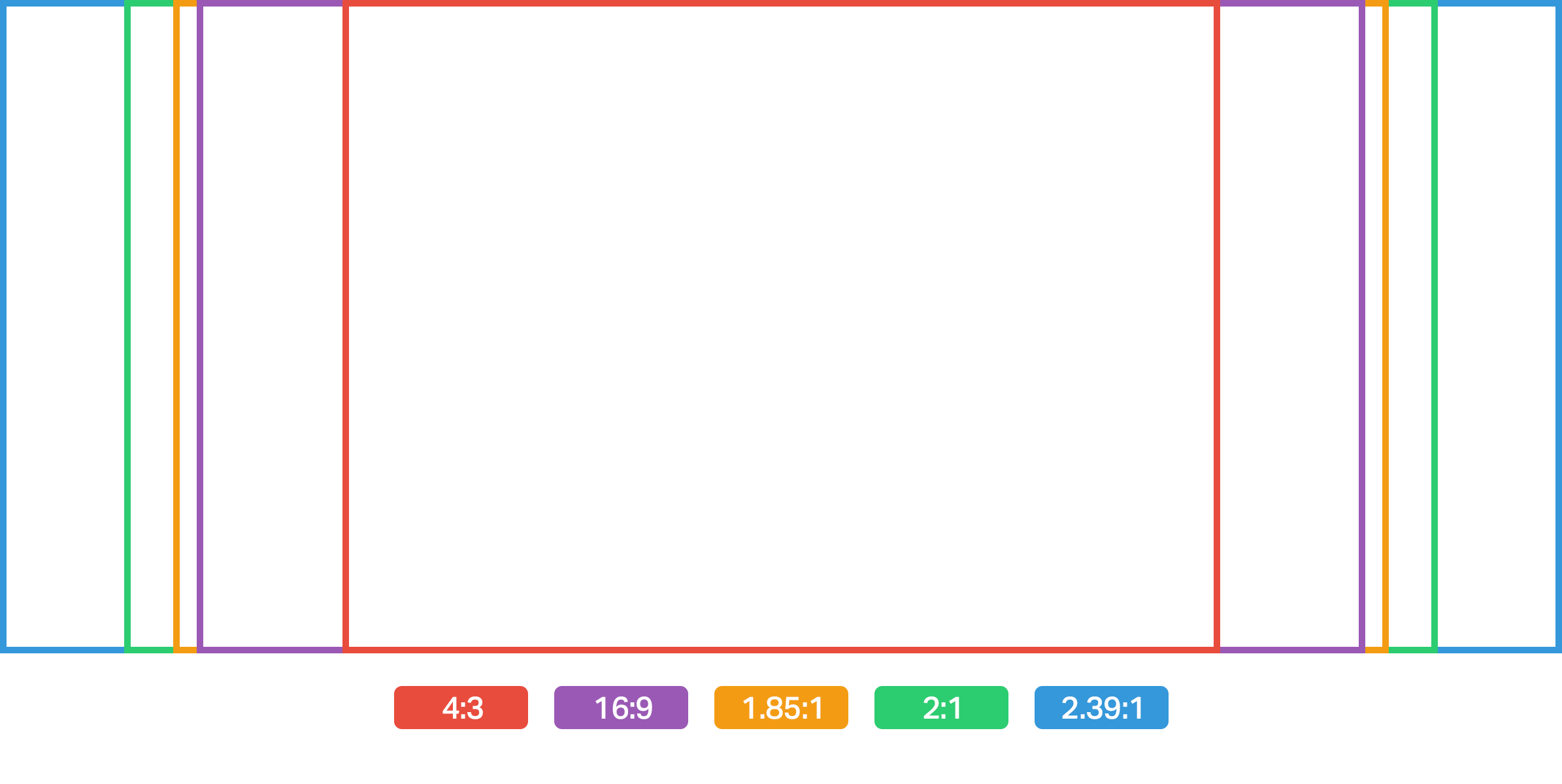 How to find the right aspect ratio for a project

There are no hard-and-fast rules you can follow to determine the right aspect ratio for a film or video. However, there are a few things you can consider to help you make the decision that is right for you and your film.
Again, these examples aren’t rules; they’re intended to help you understand the type of considerations that can be made.

When you think of the script or concept of your film, what images come to mind? Is there a specific aspect ratio that seems fitting to the story? For example, a wider aspect ratio such as 2.39:1 can sometimes add a “larger than life“ feeling to the images, which makes it popular for science fiction or action films.

Meanwhile, for more “down to earth“ genres like dramas, a tighter format like 1.85:1 can be favored, as it can give the images a more realistic touch. Aspect ratio goes hand in hand with shot composition. Together, they can heighten the atmosphere you want to create in your scene. 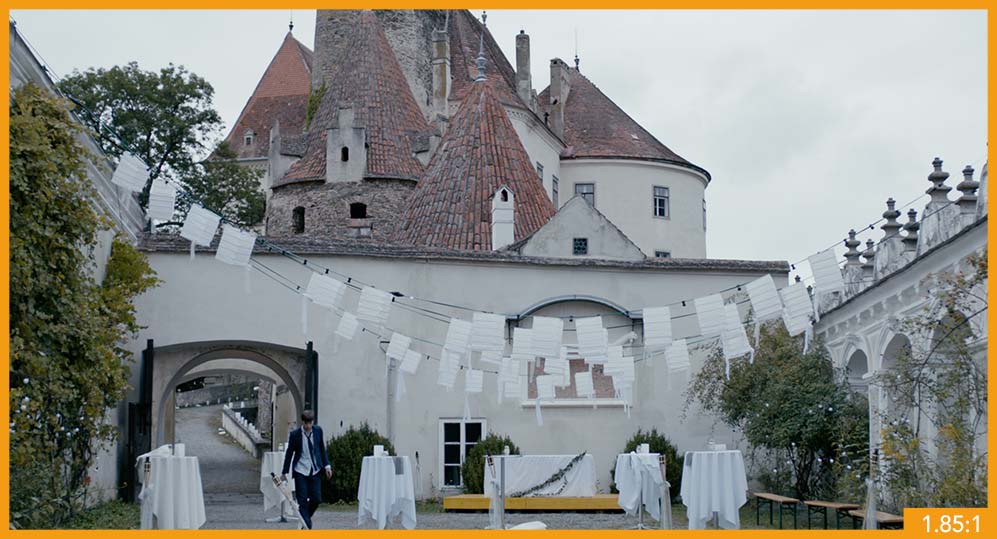 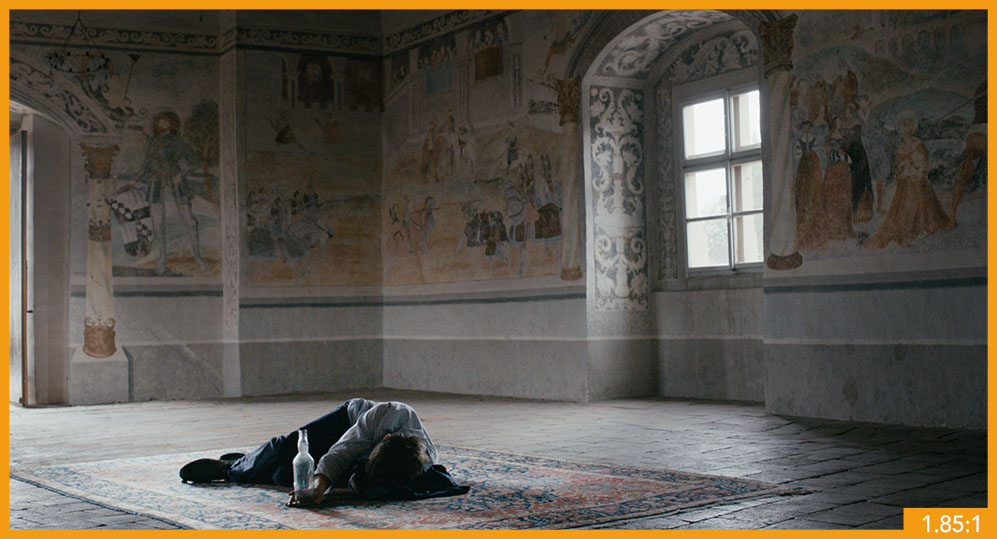 When you are planning to shoot a lot of close-ups, a more narrow aspect ratio like 1.85:1 or 1.78:1 will allow you to get closer to a person’s face without showing too much of the surroundings. Thus, you can create more intimacy. 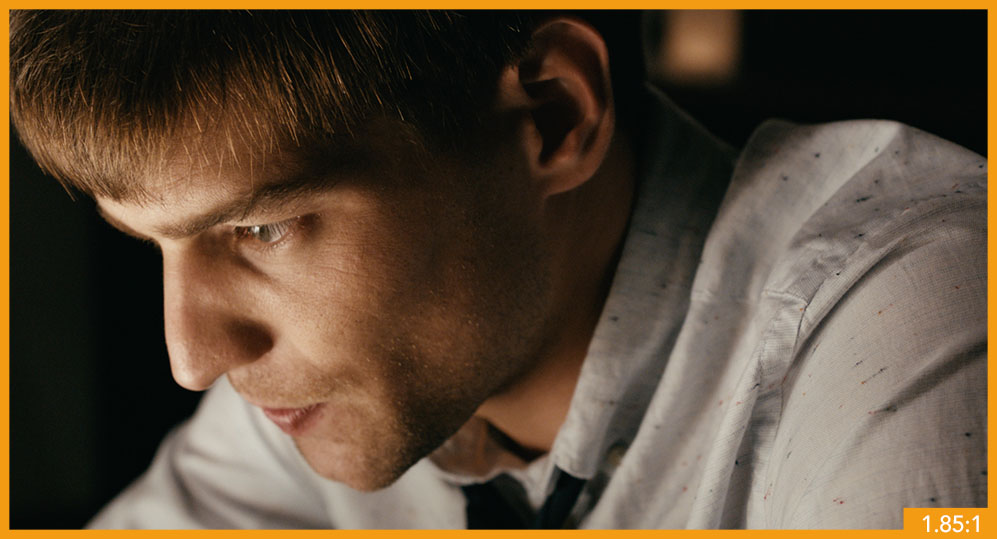 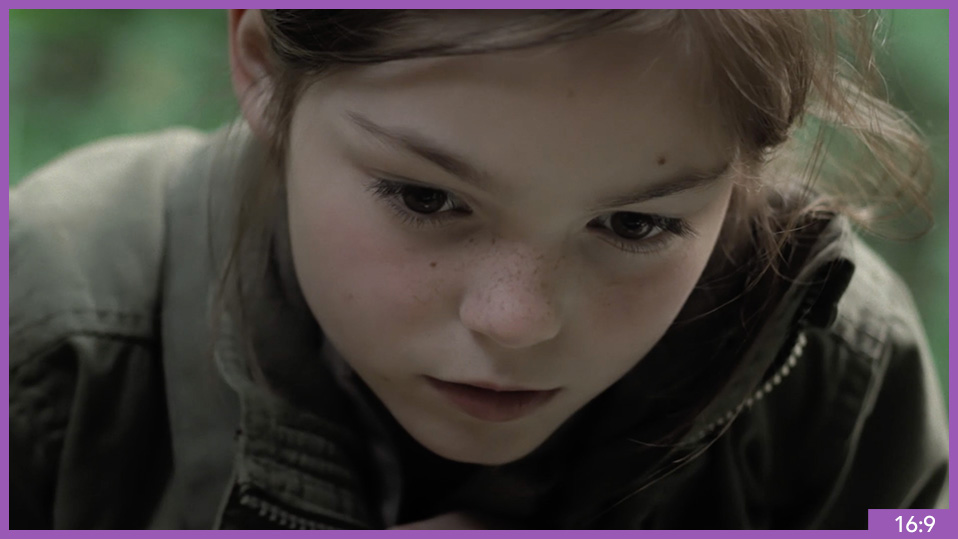 The principle of aspect ratio in film pertains both to cameras, where images are captured, and to the screens where those images will be watched.
So, naturally, the medium in which your film will most likely be distributed can be an important criterion. Will the medium be a cinema screen, a television screen, online, or all three? When you think of that medium, what aspect ratio seems best for your film?

What are the main settings of the film? For example, if a film takes place mostly outside in wide landscapes, filmmakers tend to use wider formats, to accentuate the setting.

On the other hand, if you are shooting mostly in tight places, a wide aspect ratio could make it difficult to capture everything you want to include in a frame. Therefore, it might be better to go with a more narrow format. 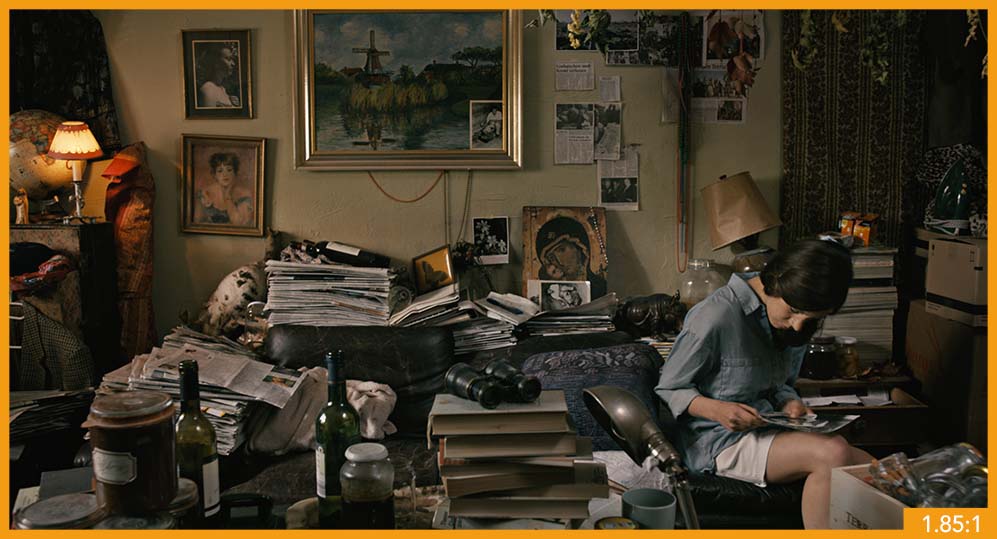 Size of actors and objects in the film

If the main actress and actor are of different sizes, a tighter format will more likely allow you to capture them together in a frame. In that case, 1.85:1 might be your preferred aspect ratio. 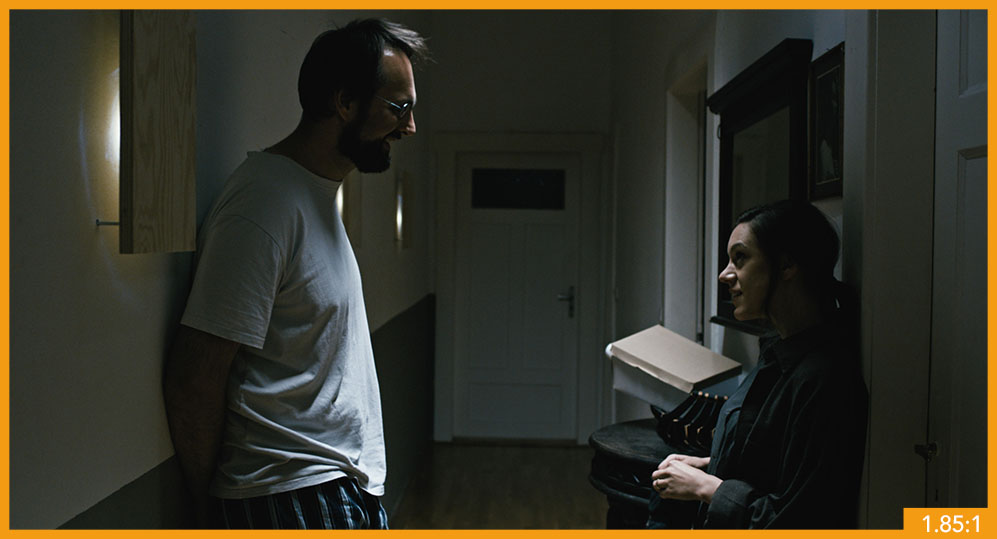 Of course, you can ignore all of the above if it goes against your deliberate creative ideas. There are various ways to express story-driven thoughts visually, and aspect ratio is one of the tools you can use to increase your vision.
Here is an example of a wide aspect ratio that was used in a small location, to emphasize the tightness of the room by showing the three walls surrounding the character.

If you feel that your story or visual concept demands it, you can also shoot wide landscapes in a narrow aspect ratio. 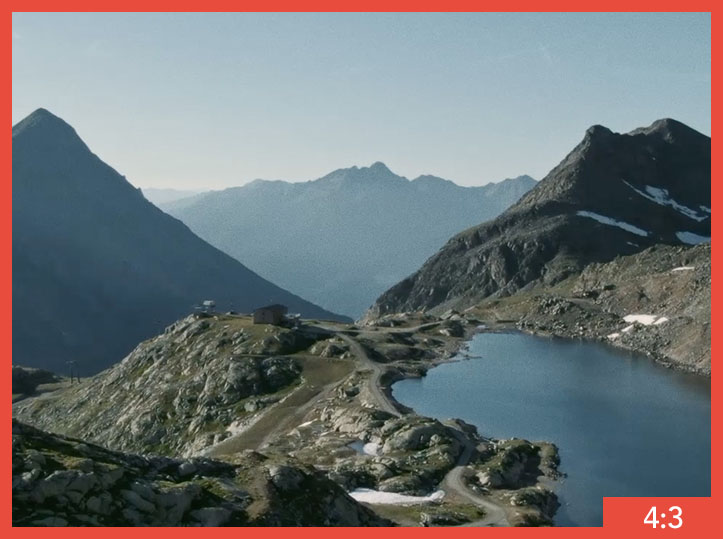 You can learn about the influence and possibilities concerning aspect ratio by watching movies and TV series and paying attention to how the respective format is used.

Some films or series switch between aspect ratios. One example is the series Homecoming (2018-2020, director: Sam Esmail, DoP: Tod Campell), which uses the aspect ratio 16:9 and the uncommon aspect ratio 1:1 to visually separate the two timelines in which the story takes place.

The fact that there are no certain rules to follow in deciding on an aspect ratio doesn’t necessarily make the decision easier. However, making some of the considerations you have just learned about will hopefully help you find the aspect ratio that best fits your visual concept and film.

What are the origins of the most popular aspect ratios?

4:3 or 1.33:1
This aspect ratio has its origin in the format of standard 35mm motion picture film, as it was most commonly used for shooting movies in the first decades of filmmaking. With the rise of television in the middle of the last century, the dimensions of television screens followed that format. In recent years, some filmmakers rediscovered 4:3 as an aspect ratio of choice for their films.
16:9 or 1.78:1
This is the standard aspect ratio for modern HDTV and is also used as a default for most online players such as YouTube or Vimeo.
1.85:1
When television began competing with cinemas, filmmakers created widescreen formats so that cinema could stand out against 4:3 TV. Out of that development, 1.85:1 was born. It remains one of the most common aspect ratios for cinema today.
2:1
This aspect ratio is often connected to cinematographer Vittorio Storaro, who tried to establish this lesser used format as a universal possibility for cinema and TV in the late 1990s. Nowadays, it is getting more attention as a format for movies and TV series.
2.35:1 and 2.39:1
These aspect ratios are often used interchangeably. Next to 1.85:1, this format is the most common aspect ratio for cinema productions. Its origin stems from shooting films with anamorphic lenses.

2.35:1 is the widescreen format when one is shooting with anamorphic lenses on 35mm film; its origin is prior to the 1970s. From then onward, the anamorphic standard subtly changed. Modern anamorphic productions are usually shot and distributed in 2.39:1. In distribution, the format is sometimes rounded up to 2.4:1, for example, for Blu-ray disc releases. 2.39:1 can also be shot with spherical lenses.

Who decides which aspect ratio to pick for a film?

If the film is not a commissioned work, in which the client decides on the aspect ratio, it is usually an agreement between the director, cinematographer, and producer.

Can the aspect ratio be decided on or changed after the film was shot?

Technically yes, but it is advisable to make this decision before shooting, as the aspect ratio of your images strongly affects your shot compositions. 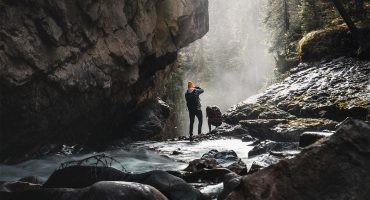